Paul Lobley
23 January at 18:09This is excellent news. Now we can put more police and PCSOs back on the streets to tackle ASB and other law and order issues.
Well done to our Police and Crime Commissioner, Hardyal Dhindsa.
From the Neighbourhood Alert System -
Derbyshire's Police and Crime Panel has today unanimously approved proposals to raise the amount of council tax paid towards local policing.
Last week, the Chief Constable Peter Goodman wrote an open letter to the Police and Crime Commissioner, sharing his professional views on the need to increase the funding for Derbyshire Constabulary.
Then, yesterday, the Government announced its plans for funding policing over the coming financial year. These figures were based on a council tax precept increase of £10 for a Band D property.
In the ministerial statement issued by the Home Office, it said: "We also propose enabling PCCs to raise further funding through precept flexibility, subject to confirmation at the final Local Government Finance Settlement. We propose to empower PCCs to increase their Band D precept by up to £10 in 2020/21 without the need to call for a local referendum, the equivalent of less than twenty pence per week."
Today, Derbyshire's Police and Crime Commissioner, Hardyal Dhindsa, presented his precept plans to the County's Police and Crime Panel, receiving a unanimous ‘go ahead' for a £10 precept increase (the portion of the overall council tax bill that is paid towards policing).
He said after the meeting: "I am grateful for the Panel's support and understanding. It shows that they recognise the financial position in which forces find themselves, following austerity. A lower rate of increase would mean a less-effective police service. Clearly the Panel appreciated this.
"They also noted the public's views. In our consultation, both face to face and online, 47.1% of all respondents supported a precept increase of £24, while an overwhelming 76.9% were in favour of £10 or more increase. I am tremendously grateful that our residents are willing to support policing in this way and assure them that they will see a more visible and accessible police service as a result."
Chief Constable Peter Goodman added: "I am pleased that the PCC has listened to my concerns around our funding provision for the forthcoming year, and has taken action by proposing a £10 uplift in the council tax precept at the Police and Crime Panel today. I would like to thank them for their unanimous support for this precept uplift, and after the Government's funding announcement yesterday, I am confident that we are able to meet the challenges that face the Constabulary in the coming year."
Following the Panel's decision today on the level of precept and yesterday's funding announcement from the Government, the Commissioner is now in a position to finalise his budget for policing Derbyshire in 2020-21. 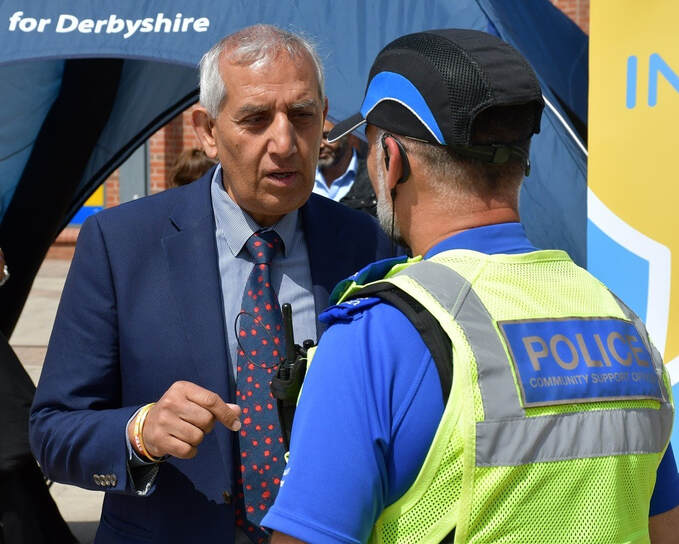 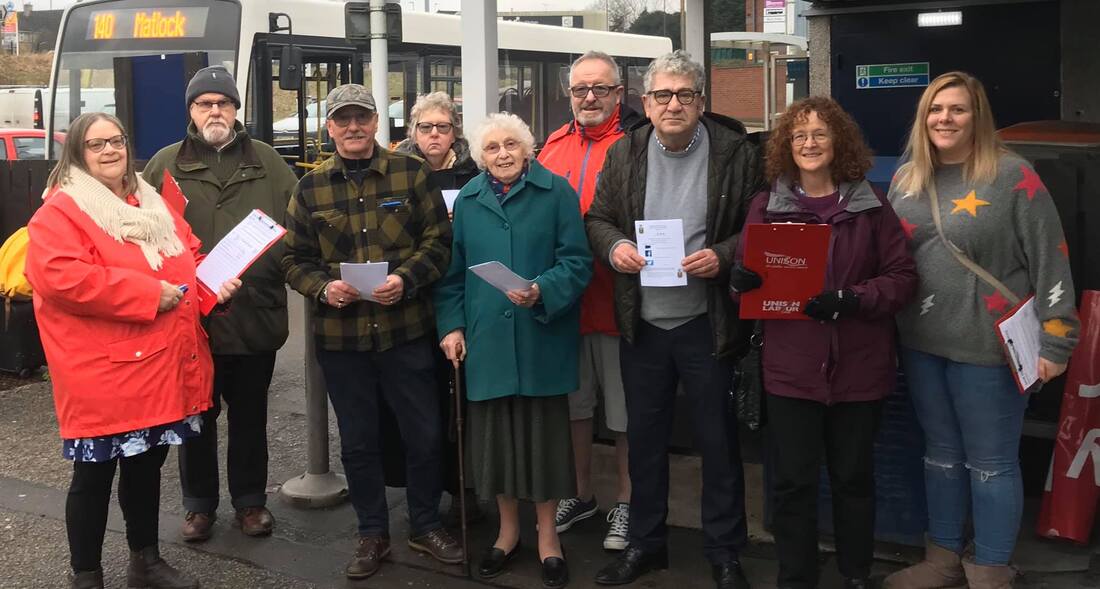 ​Further to the Town Councils press release before Christmas, the Council has been busy seeking support to stop East Midlands Railways abolishing services to London from the Town. We have been contacting neighbouring Town and Parish Councils, District, Borough and the County Council, and have written to local MP's and the Secretary of State for Transport to ask for the proposals to be dropped. The Town Council welcomes the community coming together and has been alerted to a local petition which we hope our friends and followers will sign and help send a clear message to @emr that direct services from the Town to London should be maintained. 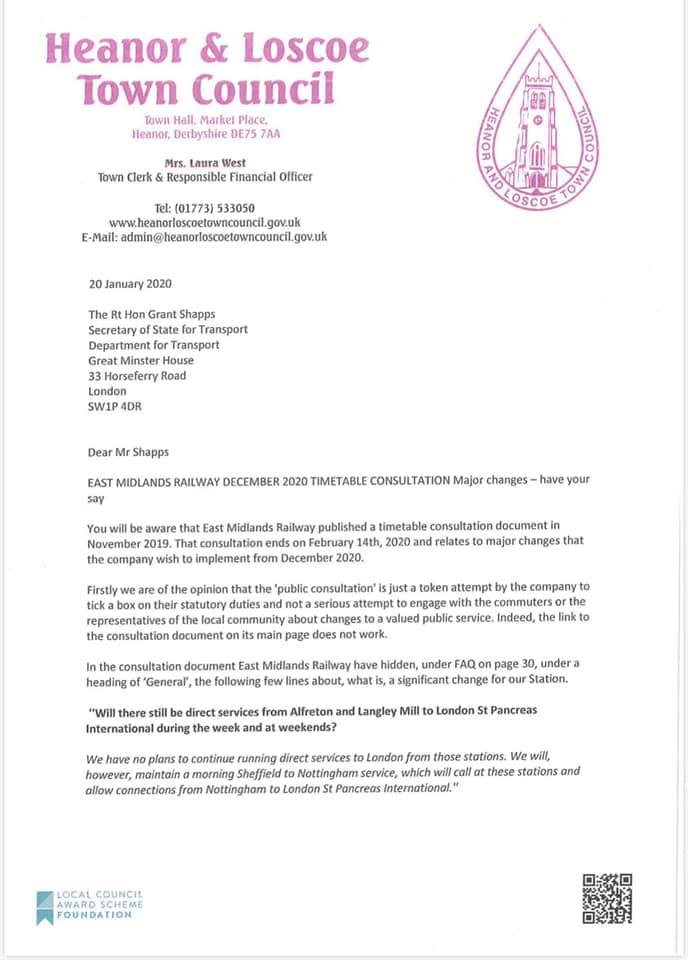 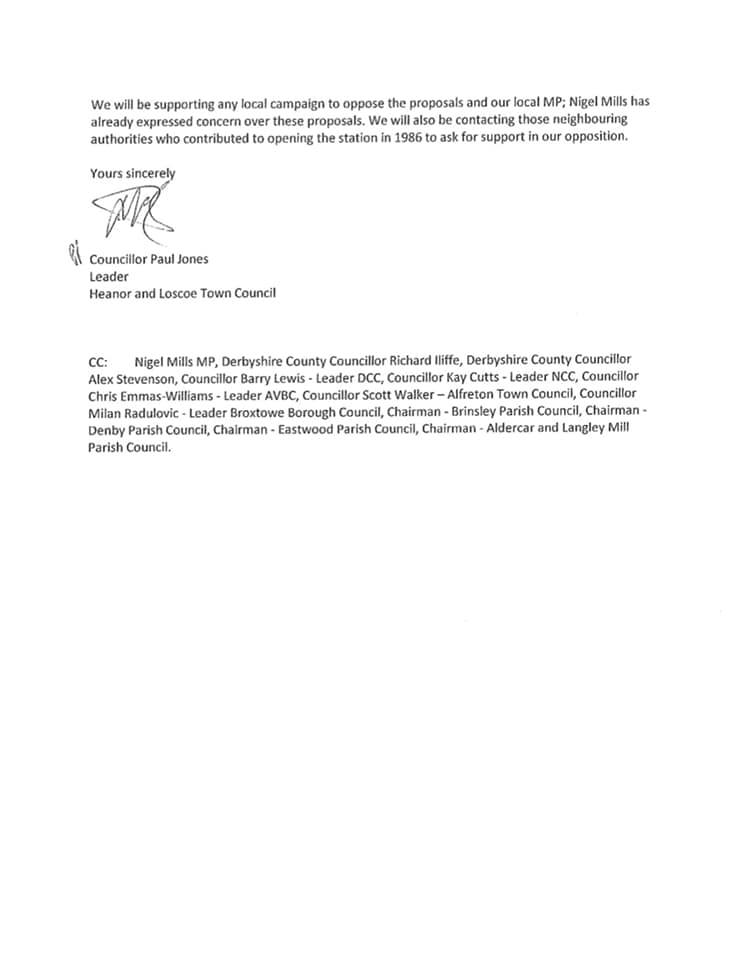 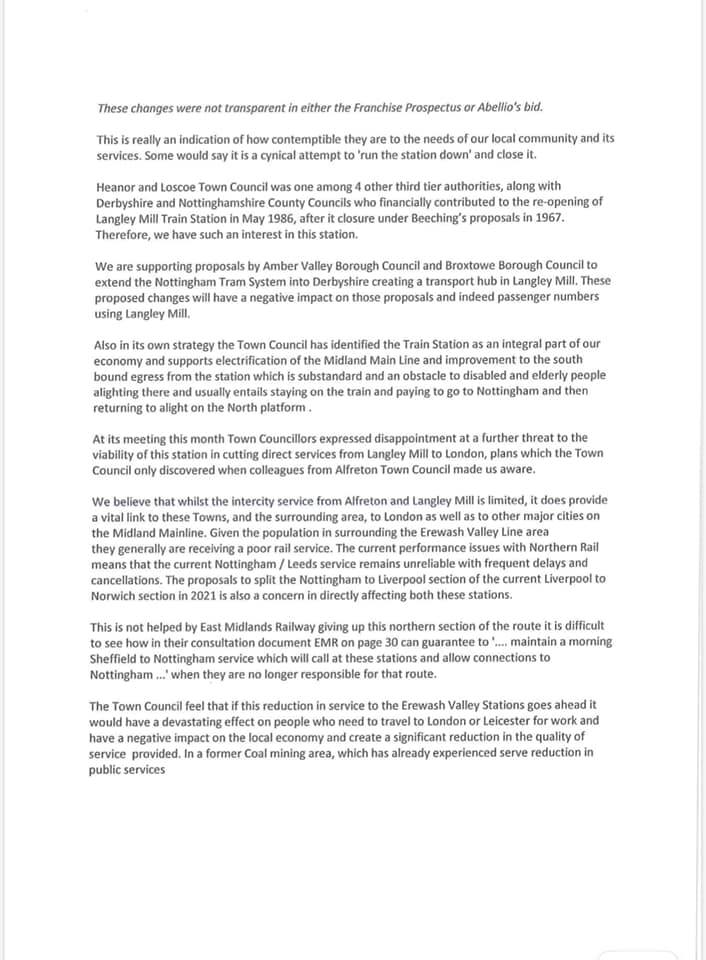 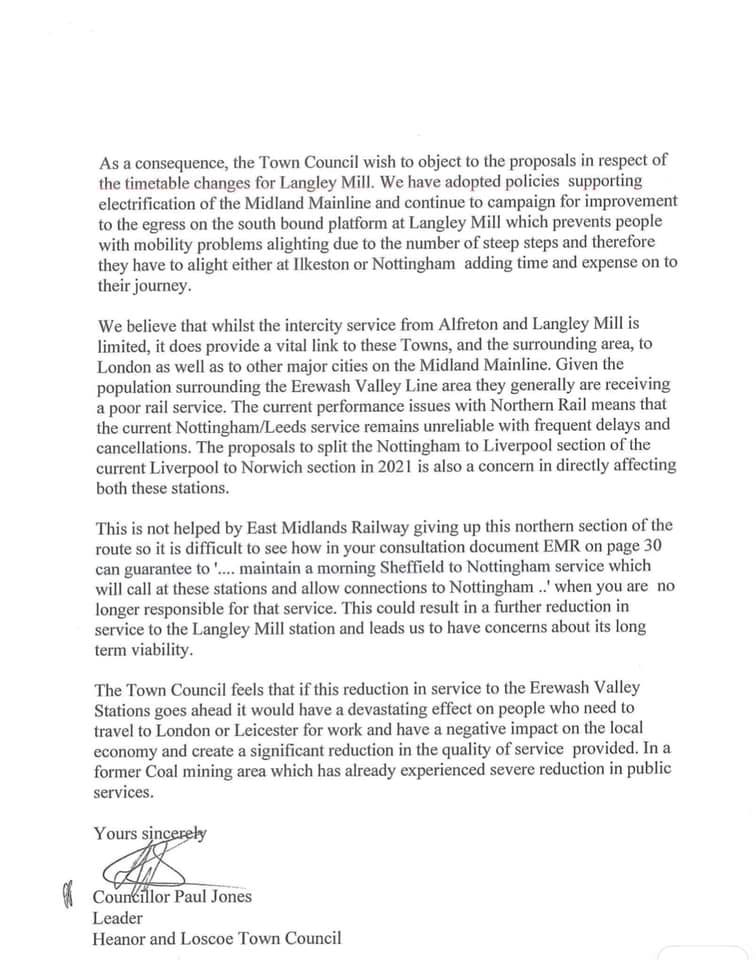 The Town Council have expressed concerns about the proposals by East Midlands Railways to no longer have London bound trains or trains from London stopping at Langley Mill Train Station. We have therefore expressed our concerns to East Midlands Railways and to the Minister of Transport (copies of these letters are shown below).
We would strongly urge that if you also have these concerns to respond to the consultation by clicking on the link below ⬇️
eastmidlandsrailway.co.uk/december2020
These proposals will dilute the attempts by all the local authorities to improve transport links within our community and improve the local economy.

The final list for MP nominations will be published on Monday 13th January.

East Midlands Railway are consulting on services. They propose to remove the direct link to London from Alfreton and Langley Mill.
We are committed to protecting public services and will be objecting. You can help by submitting your comments direct.
https://www.eastmidlandsrailway.co.uk/december2020 Help us protect our public services.

Wednesday 8th January 2020, our MP, Pauline Latham was one of the 348 miserable MPs who voted against protecting the right for unaccompanied child refugees to be reunited with their family after Brexit. She has started as she means to go on, by punishing children 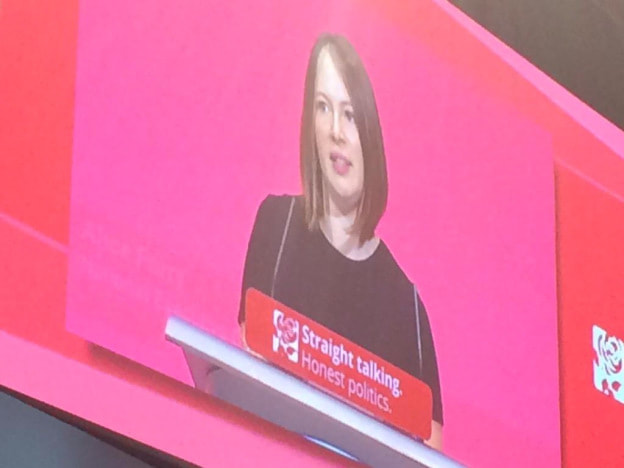 For 2020 PCC Hardyal Dhindsa will be posting a #WeeklyRoundup of his activities and upcoming plans.
The leader of the Local Government Association, Conservative cllr Lord Porter, told MPs a few months ago that vulnerable people would die as a result of social care cuts, saying that “the first serious shock will be when a secretary of state has to stand up and explain to the public why those people died because the money was not available”. He told the Commons Housing, Communities and Local Government committee: “I am not sure anybody who gets elected to parliament wants to be the person who explains why people died because of fiscal policy. It is only money, at the end of the day. Why do we need to lose people because of money?” Money is always the priority over people for a Tory government and this one is no different. 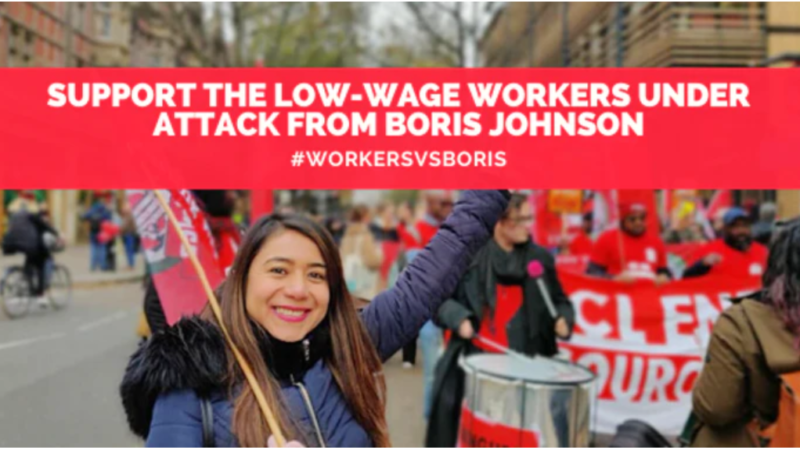 Labour's John McDonnell is among those backing a crowdfunder after precarious workers look set to be landed with significant legal debts.

In October, three precarious workers – Maritza, Wilson and Alex – teamed up with the IWGB union to force the government to abide by the law and seek a Brexit extension – after Boris Johnson suggested he would breach the Benn Act and lurch Britain into a ‘no deal’ scenario.
Instead, Johnson broke his own pledge to ‘die in a ditch’ rather than seek an extension, making the case moot.
The migrant workers say they faced a terrible prospect: ‘stand up to Boris Johnson and his threats of a no-deal Brexit, or face the risk of having some of their most basic rights stripped away’, the IWGB union said.
The workers are now crowdfunding to cover their legal fees – and have nearly reached their target.
A few days after the High Court claim was submitted, Boris Johnson went back on his commitment and agreed with the European Union to move the deadline to 31 January. The workers withdrew their claim, but now, the IWGB say government lawyers are arguing that because the claim was withdrawn, the claimants are liable to cover the government’s legal costs of at least £8,000.
The case stemmed from the fact that a no-deal Brexit would have put many workers’ rights at risk – potentially including the many employment rights that are based in EU law.
The IWGB has brought a number of high-profile cases which rely on EU law, including a £1m holiday pay claim against NHS contractor The Doctors Laboratory (TDL).
The grassroots union argue the three precarious workers are now being ‘punished’ by the government for having the temerity to take a stand.
Claimant Maritza Castillo Calle said:
“Precarious migrant workers like myself have been terrified by the prospect of a no-deal Brexit and the impact it could have on our most basic rights. We decided to take action to protect our communities, but now because Boris Johonson lied about his intention to not seek an extension, we are being asked to pay thousands of pounds. By handing us this bill, it’s clear that this government for the rich is trying to intimidate ourselves and other working class people from ever daring to hold it to account.”
An IWGB spokesperson added: “This attempt to intimidate those that try and challenge the government is in line with the Conservative party’s proposed manifesto pledge to explore changes to the judicial review process, which many fear will further limit ordinary citizens’ ability to challenge government policies.”
Labour shadow chancellor John McDonnell backed the crowdfunder to cover the claimants’ legal costs:
“This crowdfunder goes to the heart of why Boris is unfit to be Prime Minister. The PM lied, low paid workers and their union bravely took action to hold him to account, the PM backtracked, and is now vindictively pursuing them for legal costs. Low paid workers standing up for their rights and the rule of law need to be supported, not attacked.”
The IWGB recently raised over £2,000 to help house Mike Hutchinson, who was allegedly ‘sacked’ at a Royal Mail subsidiary shortly after he spoke out about ‘gig’ economy conditions at ‘gig economy’ firm Ecourier.
Josiah Mortimer is Editor of Left Foot Forward. Follow him on Twitter. 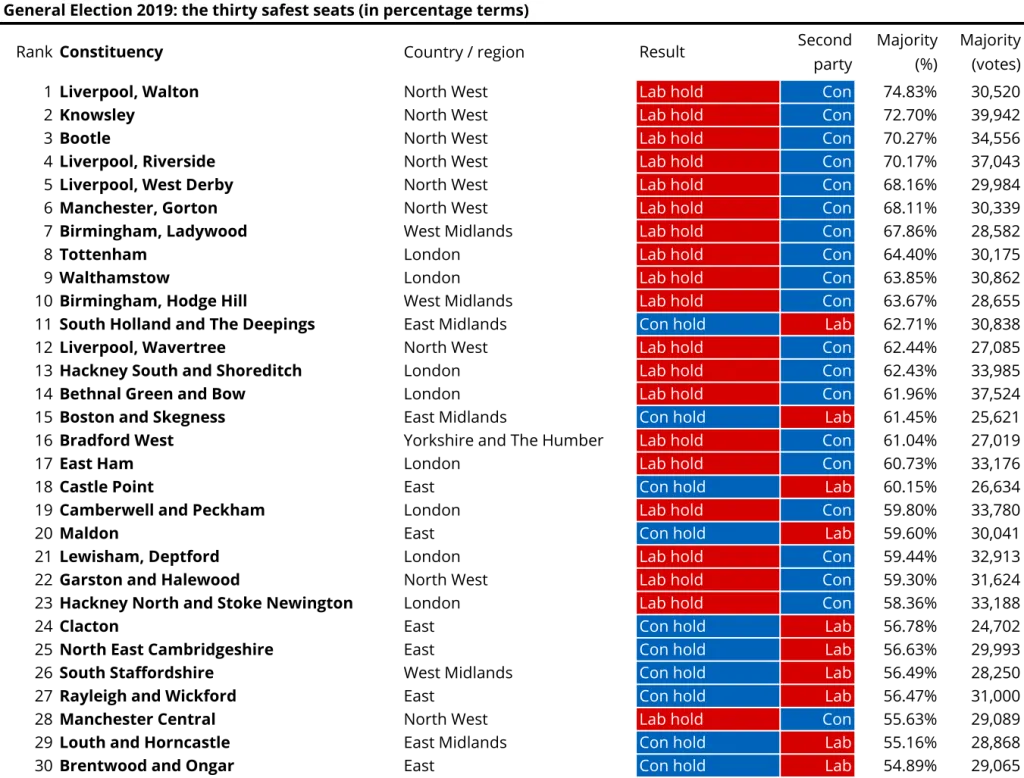 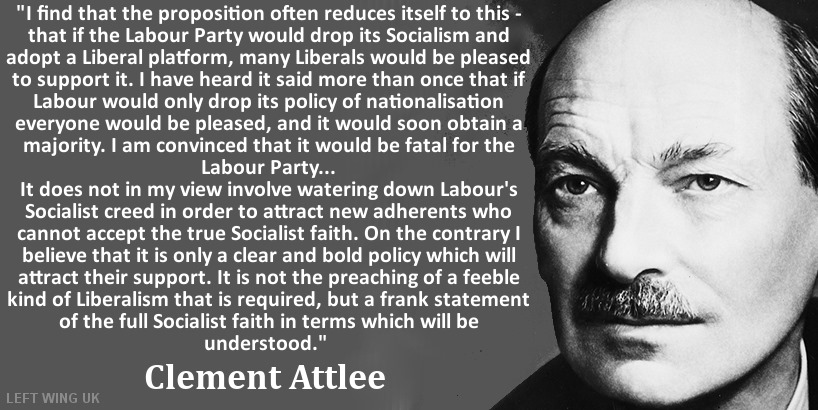