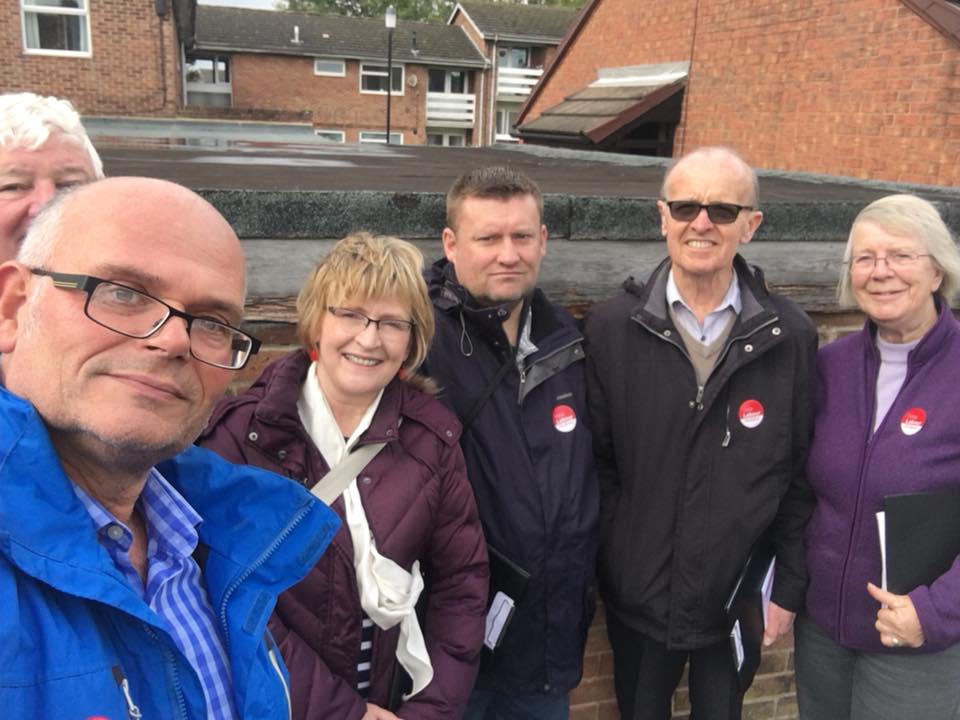 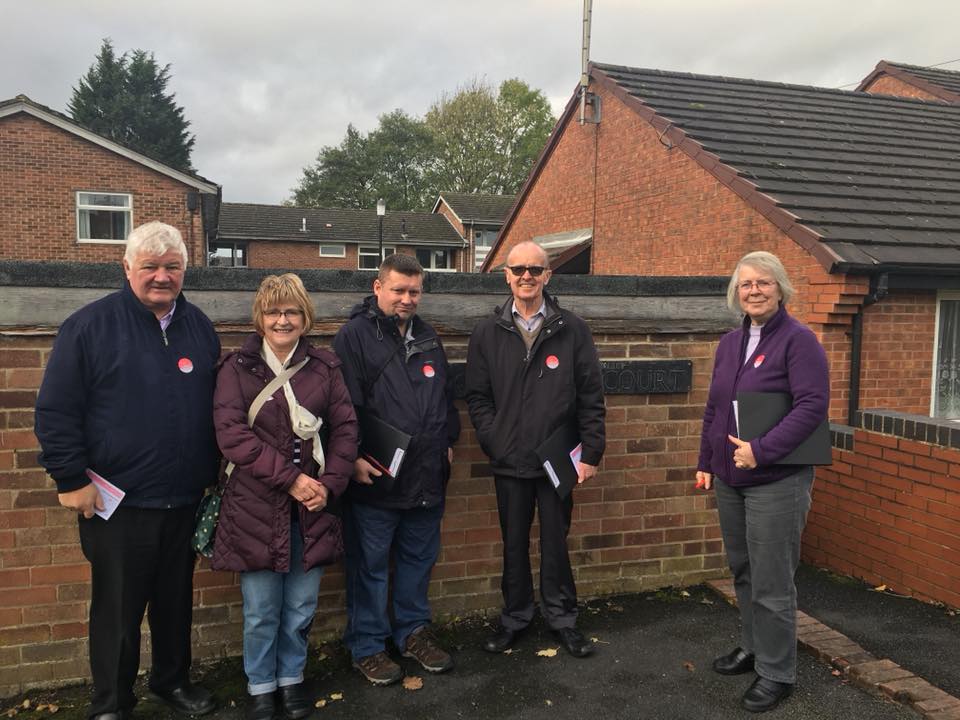 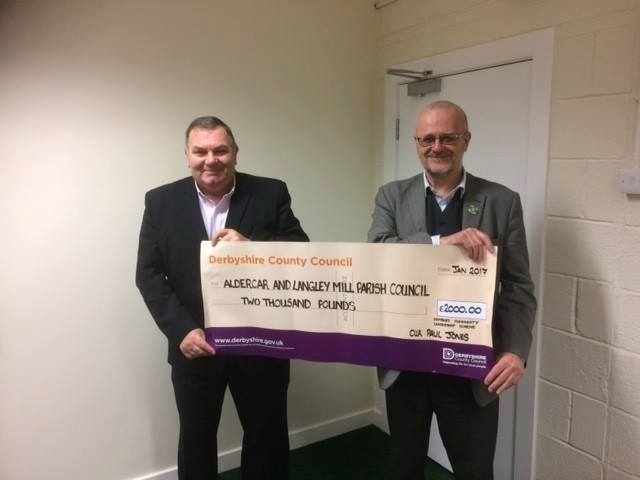 Further information can be obtained from the Clerk to Aldercar and Langley Parish Council Andrew Sharpe on 01773 717119
Email:
clerk@aldercarandlangleymillparishcouncil.gov.uk 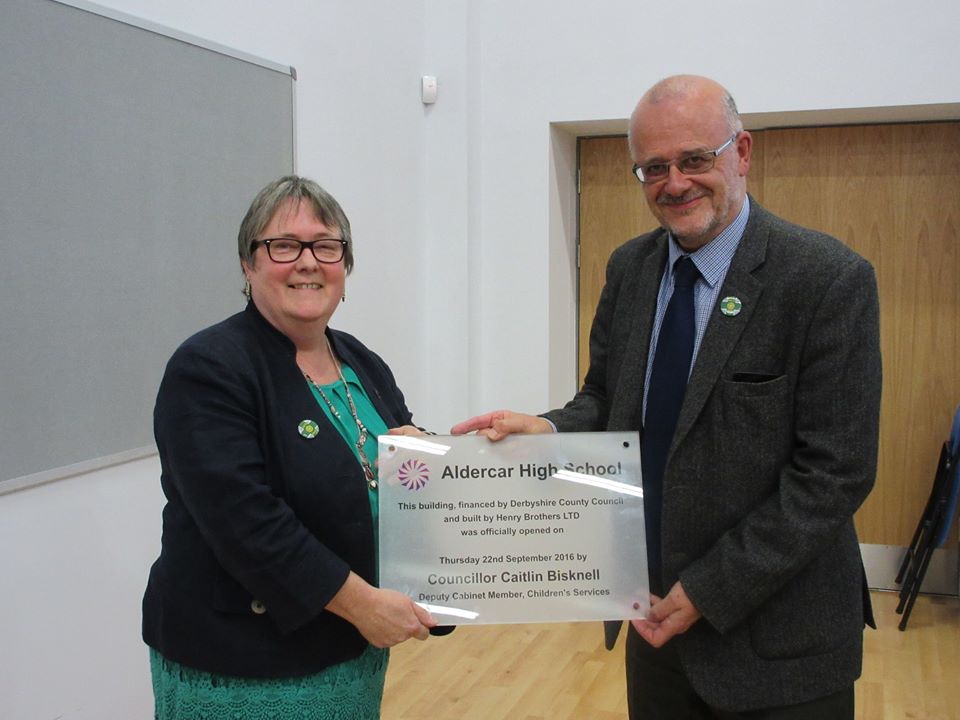 Funding from local Derbyshire County Councillor Paul Jones has ensured that a popular free local scheme for children and young adults during schools holidays continues. The Scheme, organised by Langley Mill Community Group is held at Aldercar High School and provides a wide variety of events from physical activity, arts and crafts and is for ages 7 to 16 years. Held from 10 a.m. until 3 p.m. with a free lunch included, the events are very popular – 85 young people attended the last session in the February half term. The facilities at the school are second to none.

The funding of £16700 is from the County Council’s Community Priorities Funding and is used to help the scheme continue in partnership with Ilkeston Football Club Academy, with a new initiative starting Wednesday evenings 15th March 2017 to provide weekly free football skills and training sessions. Under 11s – 6 p.m. to 7 p.m. and over 11s 7 p.m. to 8 p.m. all at Aldercar School. The project was introduced by John McCulloch vice Chairman of the Group and Sheena Trower to provide continuity to the already successful activities. The group is also in partnership with Aldercar High School to provide a weekly arts and crafts group every Wednesday evening 6 – 7 p.m. All welcome (free scheme).

Derbyshire County Councillor Paul Jones reported ‘The £16700 I have been able to donate from our Community Priorities Programme which has been set up to help support the many hard-working community groups across the county who are going the extra mile to strengthen the areas they live in and help people to help themselves. Its only a pity the Conservatives on the County Council do not support such initiatives. This type of support is especially important at a time of shrinking Council budgets and this project in Langley Mill is an excellent example of how this funding can help provide activities for our youngsters during school holidays and in the evenings. This project, however, would not be possible but for the army of volunteers who support it and make it happen. They are the unsung heroes of this project. This funding is as much in recognition of their hard work and commitment to the community as anything else. ."

Sheena Trower, the Group Secretary & Organiser stated that ‘Due purely to this valued funding award, the children's scheme will continue to develop in partnership with Ilkeston Football Club Academy, run by Head Coaches Steve Welsh & Paul Holland, supported with Chesterfield FC Coach & former Ilkeston FC player John Knapper. Their involvement cements a professional dimension to the development of the scheme. The effects of their training policy have been profound, with young people benefitting from structured, yet fun direction in sport, enhancing children’s interest in physical activities through sport. The events have run free of charge for all young people from the ages of 7 to 16 years old since 2009 and relies totally on funding from outside bodies. Derbyshire County Councillor Paul Jones continues as a robust supporter of the scheme since taking his seat at the County Council. Derbyshire Youth Workers & Derbyshire Constabulary also provide staff to support the initiative. To register your child for the scheme, please contact Sheena Trower on 07846 438426 or sheenatrower@hotmail.com for an application form from the Community Group.


Note
The £16,700 is to enhance the youth activities provided by the group and also increase capacity by helping young people to gain formal coaching and team leadership qualifications. The group is based at Aldercar High School and runs during school holidays and after school events with attendances regularly reaching over 100 children.

The money will be spent on the following:-
​
 Ilkeston Town will deliver 10-month training programme for individuals aged 7 to 16 years old.
 Adult training qualifications in Emergency First Aid, Safeguarding and Health, and Safety Level 2 for four adults.
 Deliver awareness training on healthy eating, physical and mental health development through qualified nutrition and health professionals.
 The purchase of computer, video and printing equipment
 The purchase of disco equipment
 The purchase of Sports kit for children and young people
 Sports/fitness work with reputable companies towards career development
 To provide support to 25 individuals to complete the following * First for Sport Level Two qualification in Football (aimed at 14 –16 year olds) * Amateur FA referee Level 1 certificates for aged 14 and over * Community First aid courses for ages 12 and over * 35 – 40 young people under the age of 14 will receive achievement awards through the Ilkeston Football Club based on credits earned.
 The Football sessions will commence on Wednesday evenings from 15th March 2017 on a weekly basis for two hours per week at Aldercar High School.
 Full insurance and enhanced child protection policy provided by the Langley Mill Community Group.
The Community Priorities Programme will run for two years and Councillors will identify proposals for their allocated spend by the end of July this year. Our £2.3m Community Priorities Programme fund has been set up to support local communities, tackle inequalities and help residents to build a strong future. County Councillors can apply for funding for projects within their areas which would benefit most from financial support. The type of activity which has been supported includes:
 buying tools and equipment to support activities such as developing a community garden which could be loaned or shared with other groups for community events
 renovating community buildings which result in increased local use
 setting up community-based sustainable eating projects
 covering start-up costs for new groups such as residents' associations
 funding training activities to encourage more people to volunteer. The strict criteria that all successful projects must meet includes:
 showing how local people have helped to design or plan the activity
 supporting our ongoing work to build thriving communities
 showing how the activity and its benefits can be sustained beyond initial funding
 meeting an identified need and being delivered within agreed timescales
 showing what a difference is being made.
The Photograph shows Front Row Sheena Trower ( secretary) Twins Effie & Freddie Trower, Anne White ( Chair), Back Row Borough Cllr Brian Gration and Derbyshire County Councillor Paul Jones presenting the cheque to Langley Mill Community Group 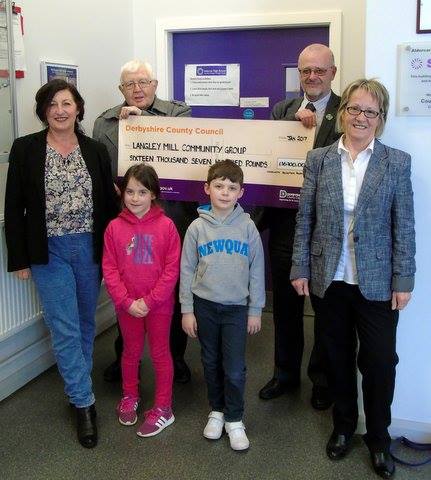 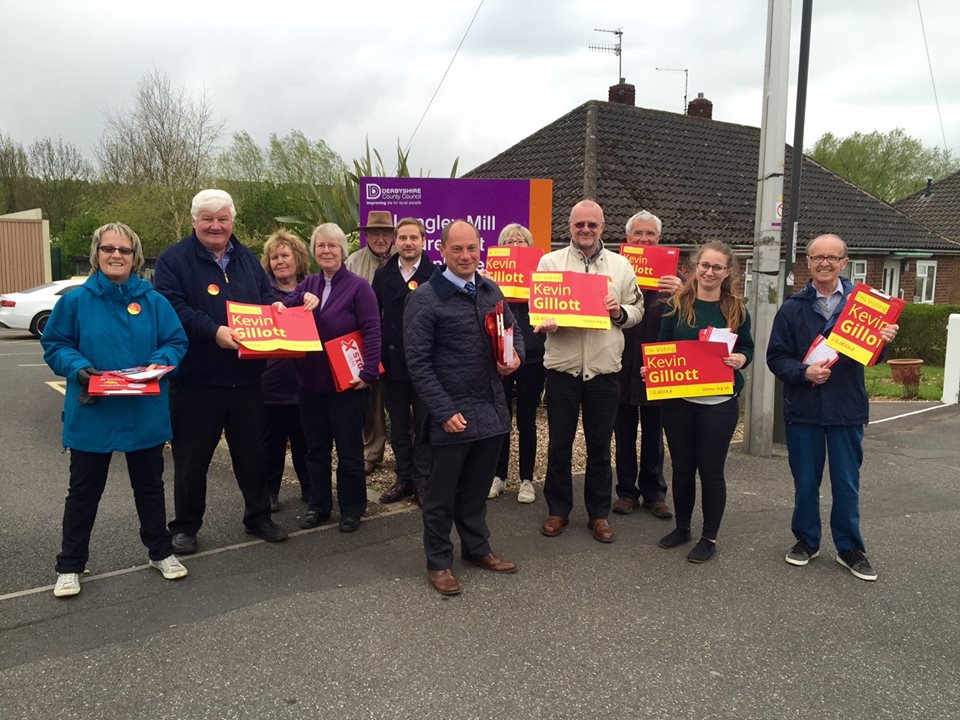 This raises a couple of issue1 The report at the planning meeting did not state that this was a retrospective application. Why ?2 The Landlord of the building, Cllr Alex Stevenson, voted in December 2012 with the rest of the Council expressing concern about the number of retrospective planning applications.Why does he vote one way in the Council Chamber and do something else outside ?

3 Why does the Amber Valley MP Nigel Mills support busineses which do not have planning permission ? Does this not give out the wrong message or was it just a good photo opprtunity ?
Labour Group Leader Cllr Paul Jones said ‘ I am disappointed in these 2 Tory politicians in being involved in premises opening or changing tits use without planning permission. There is a planning process for a very good reason to protect the public. Politicians  are not above this and this is an example of why politicians are held in such poor esteem by the public I think they should both apologise for their involvement in this. 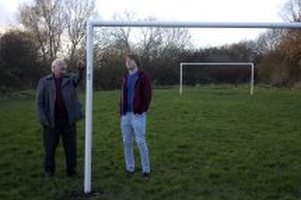 LOCAL COUNCILLOR WINS BATTLE OVER GOAL POSTS
A local Labour Councillor has at last won his battle over the provision of  some goal posts at Bailey Brook Langley Mill.

Cllr  Brian Gration has be working for many years to provide new goalpost for children in the area to allow them to play football. Now thanks to support from Futures Homescape it has been possible.

Cllr Gration said’ If there is one thing I have learnt since I became a Councillor its patience.I am pleased that at last the children will have something to help them enjoy their games of football. Its important that we should help our youngsters when they want to play sports.It not only keeps them fit but allows them to channel their energies into something away from the traffic and their homes ‘

below is Cllr Gration examining the new goalposts with his grandson Michael . a student at Derby College for sports and a part time trainer to a team of under 16′s at Aldercar school 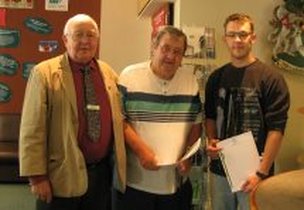 The photograph shows  from left to right Cllr Brian Gration,  and Trustees Peter Morgan and David Golding with the lease.

‘Aldercar and Langley Mill Boxing Club , based on Queens Street, Langley  Mill ,have managed to secure a long term lease with Amber Valley Borough Council for their premises which secures the club future and allows them to obtain funding to expand their services.

The Club which was formed 1992 is open three nights a week providing a valuable facility for both male and female youngsters in the Community .

Local Borough Councillor Brian Gration ,who has been assisting the club in obtaining the lease said ‘  ‘The excellent work the club does for the youngsters in the community ,I am sure help reduce anti-social behaviour.It is important that there is something local for the youngsters to put their energies into.The new lease will give them the chance to improve their facilities and help the next generation of young people. I wish them every success. After all the  hard work the Trustees have put into this they deserve it.’

TORIES HAMMERED IN COUNTY COUNCIL ELECTIONS
Labour won 6 of the 9 County Council seats covering Amber valley plus a Ripley Town Council by election .It certainly was a very bad day for the Tory group.